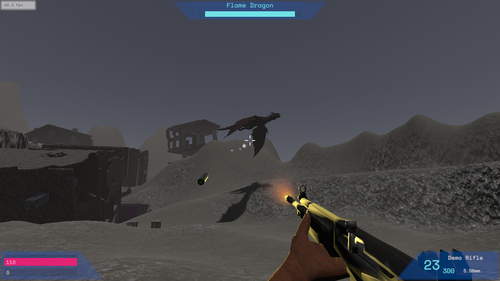 It's been a tumultuous journey, but the Fall 2019 demo is finally here!

Compared to last year's demo, this one is a lot smaller and more focused. It's a pure mechanics demo, rather than a mechanics demo with some story elements. It's shorter, built around a single encounter, but demonstrates a lot of what's been in the pipeline over the past year and what will be core to the gameplay of the finished game.

The setup is simple: there's a dragon, you have a rifle, kill the dragon to continue. The rifle has all the FPS mechanics you'd expect like reloading, aiming, recoil and spread, and movement is using a new character controller that is much more fluid. The dragon has new actor behavior and a few extra boss mechanics.

Note that this is very much an early, experimental demo. It's not as rushed as the last demo and it's much smaller in scope, so it should be perfectly playable without any weird issues. However, the configuration options are a work in progress, and the Linux and Mac builds have not been tested. Have fun, but keep your expectations reasonable.

I'm definitely looking for feedback on this, so let me know what you think, bad or good!