This project is now cancelled. See this devlog for an explanation and postmortem. This page will remain as is for historical reasons.

The long awaited (and still awaiting) threequel heads back to Rynn and ups the ante with fully 3D environments and gameplay built on the Unity engine.

Ascension III is a sci-fi/fantasy RPG that involves dungeon crawling and intense gunfights with dragons. It blends classic and modern elements with a focus on combat, a rich world to explore, and an over-the-top but self-aware storyline.

Thirty years have passed since a recon ship crash-landed on Rynn and introduced a world of blades and magic to the greater galaxy. It is a time of great change, with new technology, new ideas, and new institutions. The Remarian Empire, once the world’s premier superpower, is fracturing as provinces break away and form nations on newfound ideals.

Aurelia, daughter of Markus Caesar III, is studying on Earth. It is expected that she will take the throne in a decade or two, though the Senate currently prefers her cousin, Alexander. But when Markus dies unexpectedly, she returns to Rynn where Alexander is crowned. She goes into a self-imposed “exile” to the Virtis Islands, in fact with the intention of completing the last part of a plan that her father started.

It is believed that a powerful ancient ruin, the ostentatiously named Ark of Infinite Power, lies beneath one of the islands. Markus believed that it could be used to restore the Empire to glory, once again the dominant power on Rynn and possibly even a player on the galactic stage.

But she is not the only one searching. On her first night on the islands, dragons suddenly attack, for they too want the power for themselves…

This project is at a very early stage in the development process. The focus is currently on developing game systems, which is progressing smoothly. However, this is a big, long-term project, and everything is subject to change.

An archive of previous builds is here.

Parts of this project- mostly the RPG code- are open-source on GitHub.

Extract the demo package and run the executable. Select screen resolution and graphics quality in the launcher and run! Note that the Linux and Mac builds are untested as I do not own a Mac or a bare-metal Linux box. 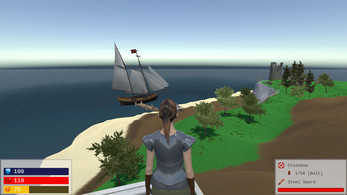 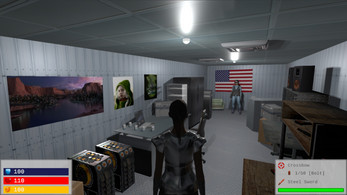 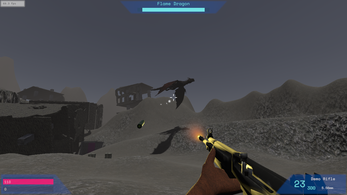