The End Of Ascension III

Or: Requiem For A Dream (Project)

This is the end of Ascension III, at least for the foreseeable future.

At this point, I have not worked on its content in over a year, I have virtually no interest in the project, and maintaining it has become a net burden. Even still, I did not make this decision lightly, and it has been even more emotional than I expected. Ascension III has been my flagship project for about four years, and I have (not wrongfully) described it as my dream project.

This will be a longer post, but probably not long enough to cover the story of Ascension III in its entirety. I don’t want this to drag too much, and I may omit or miss a few things. There will probably be a follow up post- maybe in a week, maybe in a year. The full story of the Ascension series is a long one that will have to wait another day, but I’ll summarize it here, or at least enough of it to understand where Ascension III came from. Of particular importance is the original Ascension, the overly-ambitious plans that came immediately after, and the failed Ascension Revolution project. 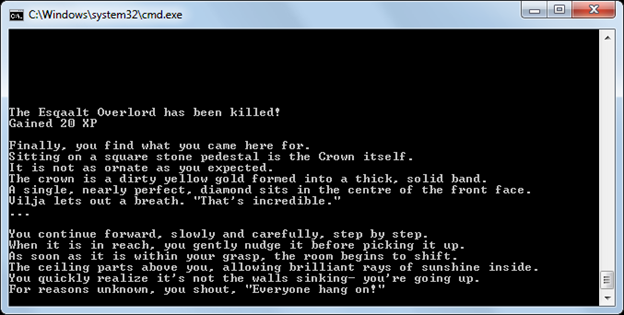 Ascension was the game I created for my high school programming class. It was a text RPG, and for the time, an ambitious project for me. In retrospect it was a not a very good game. The mechanics were rough and unbalanced, and the writing ranged from mediocre to cringey. It was also extremely buggy and the code totally unmaintainable. But I had built a world for it, one that I had fallen in love with, and one that I had plans for. I really liked the idea of a fantasy world coming into contact with a sci-fi galaxy, and I wanted to do so much more with it.

I came up with a plan for the series pretty quickly, probably in the few months following the release of the first game. The games would alternate between ones set on the fantasy world of Rynn (odd numbers) and ones set in the greater galaxy (even numbers). There were a few odd ones out- I think the intent was to have gaiden games between each main series game, though that was absurdly ambitious in retrospect. In short, I had two games planned for the near term by mid-2013: Ascension 2 and Ascension Revolution, and one farther out: the first concept for Ascension III. 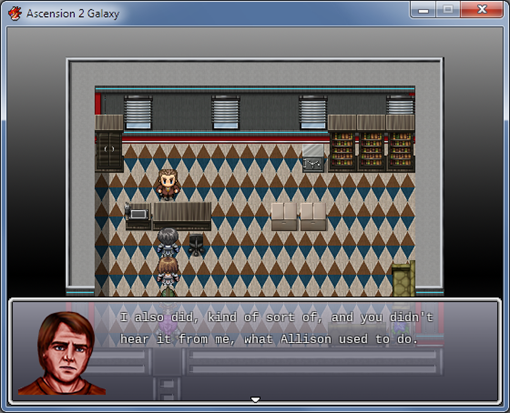 Ascension 2 exists. It is also not very good, though it is better than the first game. I’m not sure if I’ve ever done a formal postmortem on it, but in short I’ve never been happy with the result. I had ambitious plans, but had to cut a lot of them, was never able to get the art in order, and ended up with a generic RPG Maker game, and an ugly one at that. Still, I did finish it, I did release it, and there are some things about it I look back upon fondly. 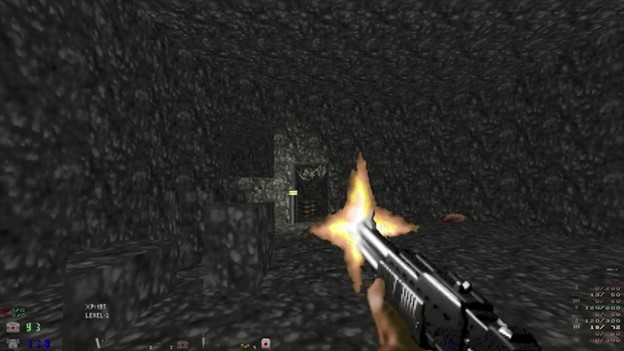 Ascension Revolution was to come after Ascension 2, though it was both developed and cancelled before work had ever begun on the latter. Ascension Revolution was an absolute shitshow, and probably deserves its own postmortem someday. Basically, I was way, way too ambitious for my skills and resources. It was supposed to be an epic FPSRPG with a late 90s style with Bioware-like writing and a big open world. In reality it never made it past an incredibly glitchy, ugly Doom mod with cringey writing and broken mechanics. I put out one big demo on Bastille Day 2014, but it was nowhere close to where I wanted and I pulled the plug on the project soon after.

The Ascension Adventure games are part of the overall story of Ascension, but they’re not really significant to how we got to Ascension III, so I’ll skip over those here. There are also a lot of related concepts that were never developed or announced, but again, not important so I’ll skip them.

I started on Ascension III Revolution in 2016. It was kind of a hybrid of the earlier Ascension III concept with some bits of Ascension Revolution rolled in. I had a new tool- the Unity engine and all its resources- and a lot of new knowledge from my post-secondary education. For the first time since 2014 I thought this was actually doable, and I started by throwing together a quick demo map of an island with Standard Assets and some stuff from the Asset Store. 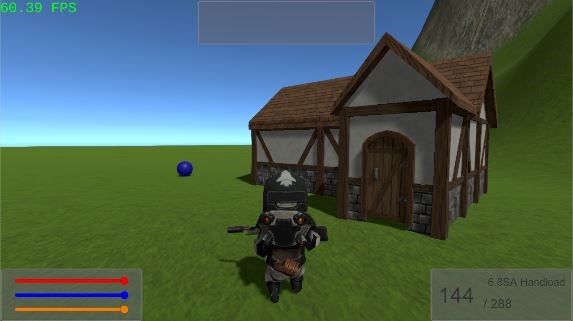 I think this project was pretty short lived, but parts of it definitely ended up in the next iteration of Ascension III. The save system and some of the core bits of what was then called ARES (Ascension Revolution Executive Services) were developed on that island.

The latest iteration (Californium) of Ascension III began in 2017, with development in earnest in 2018-2019. It was a cut-down version of the 2016 concept, moving from trying to do an entire large region to a much smaller and technically-doable setting of an island chain, as well as cutting out a lot of the empire-building and tactical-commanding gameplay ideas. On the technical side, at some point ARES became CommonCore, but effectively it was the same code rearranged and continued.

Progress was really good during that peak period. The 2018 “Island” demo was rough as hell, with extremely janky movement and combat, but it was ambitious and already showed a lot of working systems, including NPCs, inventory, levelling, quests, dialogue, and save/load. The 2019 “Dragon” demo showed a more complex enemy, the first decent-looking HUD I made, and vastly improved combat and movement. I was pretty happy with the mechanics of the game and its promise by that point.

Ascension III was my dream project, full stop. But there’s the key word: was. It was my dream project at the time I started it, but with such a long term project, well, things changed. Somewhere along the line it stopped being the thing I wanted to do more than anything else. My preferences for tropes and mechanics shifted, so it didn’t have the same appeal after a while. It was still appealing, but maybe not perfect game appealing.

I also found I liked making smaller, sillier, lower-stakes projects a lot more than slogging away on Ascension III. The problem with the big project was that it started to drag; it was moving but the end was so very far away. It was always intensely challenging and felt incredibly high-stakes; I wanted it to be perfect. With other projects I could relax a bit, bodge away and if it didn’t work out or ended up kinda crap, no big deal.

In 2019-2020 I started to step away from Ascension III. I kept plugging away on core features, but mostly had other games in mind. I don’t think I added any content at all, and the big Frangis vertical slice demo never happened. I continued to maintain the codebase into 2021, but I was basically just using it to develop features for CommonCore, and even that fell by the wayside, with features being developed directly for various games and then brought back into the main commoncore repo. It was pretty clear at that point that I’d lost interest in Ascension III entirely, I was not going to actually work on it for the foreseeable future, and maintaining it was just a burden.

On June 8, 2021, I built the final build of the 2017-2021 iteration of Ascension III (Californium). The next day, I changed the status of the game on itch.io to Cancelled. I had not yet formally announced its cancellation, but it was over.

Do I consider Ascension III to have been a waste of time? In a word, no. In two words, hell no!

I learned a lot from Ascension III. Most of this was hard lessons I learned by screwing up, but some things I learned by doing in a positive way, and I picked up literal pieces of advice from others along the way.

I went into the project with a lot of “how the hell am I ever going to do this” questions. In time, I found an answer to almost all of them- certainly, all the ones I needed immediate answers to before the next milestone. A lot of the ambitious stuff I wanted to do was doable; it was just a matter of figuring out how and trading off time, cost, and quality.

On the other hand, I also learned (or maybe didn’t learn) about scoping a project, and what the definition of “manageable” really is when you have a day job and the attention span of a gnat. I learned that maybe some devs can commit to their dream project for years, but I’m not one of them, and I both do better and have more fun with smaller projects. The big ones are just too stressful for me, and get bogged down.

I also met some awesome folks and got some great feedback when showing Ascension III in local game dev circles. Unfortunately, the COVID-19 pandemic of 2020-2021 threw a pipe wrench into my networking plans, though I did find other communities online.

What I gained from Ascension III goes beyond lessons learned. The ARES/CommonCore base developed originally for Ascension III laid the groundwork for many other games. Without that tech, there would be no Bang Ouch or Shattered or Takagi. CommonCore has powered nearly a dozen of my games with many more planned. There is quite literally a bit of Ascension III in every game I make.

Even the ridiculously-high-resolution fabric texture used for the Ascension III logo art ended up reused. 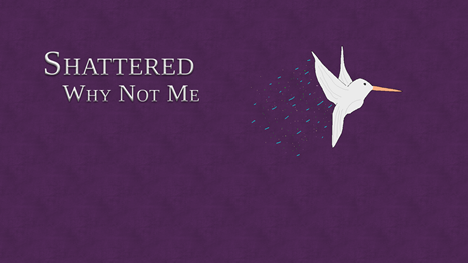 Is this truly the end of Ascension III and the Ascension series? Maybe, maybe not. I have no plans to work on it this year, or next year, or the year after that. But who knows? I may come back to it someday.

In the meantime, I’ve got some exciting projects coming down the pipeline. I encourage you to check them out, because each of them in their own way is a spiritual successor to the dream that was Ascension III.